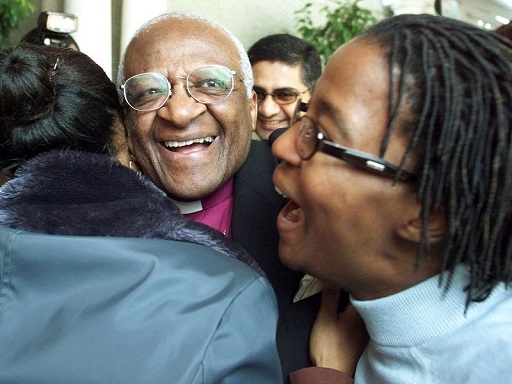 South Africa’s Anglican Arch Bishop, Desmond Tutu, has died. Arch Bishop Tutu died in hospital a day after Christmas. He was ninety years. Tributes have continued to pour into South Africa from all over the world on his death. He has been described as South Africa’s “moral compass” and “moral conscience” among many other eulogies. The Arch Bishop is also fondly remembered for his perennial sense of humour even in the midst of obvious adversity.

Arch Bishop Tutu has won numerous local and international honours for his work for change in South Africa and globally. The then US President, Barack Obama, awarded Tutu the Presidential medal of Freedom in 2009. In 2012, Tutu received the Mo Ibrahim Foundation one-million-dollar grant for “his lifelong commitment to speaking truth to power.” In 2013, He was awarded the Templeton Prize for his “lifelong work in advancing spiritual principles” which have helped to liberate people around the world. In 1984, Arch Bishop Desmond Tutu was awarded the Nobel Peace Prize.

While Desmond Tutu seemed to be in the public domain all his life and for good reasons, the journey was not always smooth. Born to poor parents in 1931, young Tutu wanted to be a doctor and even qualified for medical school, but could not afford the school fees. He became a teacher because the government was awarding scholarships to people who wanted to become teachers.

However, in the 1950s, Desmond Tutu resigned from teaching in protest over the government’s restrictive educational policies against Black South African children. He joined the Anglican Church and was ordained in 1960. His pulpit would become a platform for the Arch Bishop to attain global renown.

As the South African government tightened its grip on freedoms and increased its oppression of Black South Africans, Desmond Tutu, who had returned to the country and was ordained Bishop in 1970, became more vocal against the government. Tutu was named Arch Bishop of Cape Town in 1986. Two years after, he was arrested on his way to South Africa’s Parliament with a petition against apartheid. But the Arch Bishop was not done. The next year, he led a 20,000-man march in Cape Town against apartheid.

Following the release of Nelson Mandela from prison and his election as President of South Africa, Desmond Tutu was appointed chairman of the Truth and Reconciliation Commission set up to investigate and address human rights violations that occurred during the apartheid years.

There is obviously no end to telling the great influence and impact the life of Arch Bishop Tutu has had on the world. The Nelson Mandela Foundation aptly described his loss as “immeasurable,” and Tutu as being “larger than life” and his life as being “a blessing” to many around the world.

At a time when the African continent is still grappling with pockets of despotic regimes and an epidemic of unpatriotic governments, the era of fine men like Tutu and Mandela now seems like a mere dreamland rather than a stage once attained by the continent. While their generation struggled to attain self-governance for the continent, today’s generation is embroiled in a struggle to deliver Africa from local tyrants devoid of any strand of conscience.

Regardless, Desmond Tutu is proof to our generation, that in the midst of strangulating economic circumstances and the paralysis of daily living, young people can muster the courage to stand for something definite and stand with it firmly till the end of their years. We are reminded once more that as the wind of time blows, uncommon efforts of common men determine the direction and speed of social progress. Desmond Tutu’s generation has played its part. As he lies in death, the future of the continent he fought for now lies with the living.